Being an Etsy Seller

You know, MCG got its start on Etsy!  It was, and still remains, the place for crafters and artisans to sell their wares.  I especially loved the Alchemy function, where you could find requests for custom made items and bid on fulfilling them.  That's how I ended up making an axolotl for a woman in Canada who had lost her pet axolotl.  I never did find my notes for the pattern (a crocheter on Ravelry had asked me), but considering he (and he is a he, I researched the differences!) was made from a handspun yarn, etc., he really was meant to be unique and the only one :-) 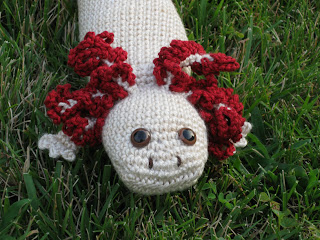 But, I digress.  This post is about evolution and adaptability, both of which are positive spins on change, which sometimes can elicit negative feelings.  Sometimes, change really is good.  For example, I have not particularly kept up well with my Etsy shop.  Since I now concentrate on making patterns rather than the items themselves, I post the patterns on Ravelry, though I can't bring myself to close my Etsy shop because I've been on there since the beginning in 2005!

So, why not also post patterns on Etsy?  Well, putting aside the costs associated with doing that (which are a bit more than on Ravelry), the biggest concern for me was that a pattern purchaser on Etsy would not have access to the pattern immediately - she or he would have to wait until I was able to make it home to my computer to send the pattern electronically (though I have had a few purchasers request hard copies mailed to them).  Maybe it's just me projecting my desires onto others, but if I find a pattern I like, I want to be able to download it right away and get started (or at least read and play around with it).

Well, the other day, I was looking around on Etsy (it still remains my home page and a great source for pins to my Pinterest boards) and I saw a pattern that I clicked on and was given the choice to purchase it as a digital file!  Whoa, instant downloading available on Etsy!  A game changer?!  I won't know til I try, but obviously it's time to rethink my Etsy shop :-)

The bigger point here is you just have to be open to change and to be willing to rethink and adapt to changes, many of which turn out to be good.  And just because something didn't meet your needs in the past doesn't mean it's not worth reconsidering in the future.  Sometimes, it's worth giving second chances (or even thirds ;-).  Your business plan (or life plan) is not a static concept -- it has to bend, grow, change and adapt as the world around it does all those things.  It's easy to get caught up in whatever actions you're currently pursuing and just stick to those, but do take the time periodically to step back, do a little research into what new things are out there, and then think about what (positive) changes you want to make to adapt!
Posted by Many Creative Gifts at 9:14 AM No comments:

It's amazing how many variations of the basic stitches there are in crochet, and how a small change in the order of steps can make a stitch look so different.


It's hard to explain in words, but here goes:

I hope this short video also is helpful to you in giving this fun variation on the regular dc stitch a try!

Posted by Many Creative Gifts at 9:31 AM No comments:

I harvested the first eggplant yesterday! 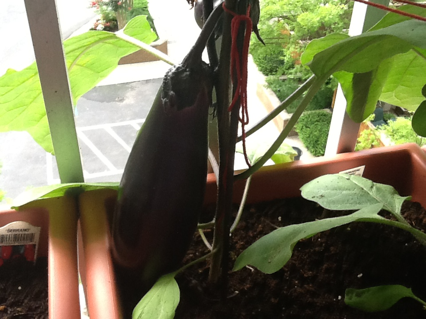 In fact, I think I might have waited a little too long because it was a little squishy, but I cut it up into chunks and put the chunks to soak in some cold water and salt for about 1/2 hour to an hour, and they were fine.  Then, I harvested a few cherry tomatoes and a Serrano pepper and chopped those up too.  A little olive oil and garlic in a sautee pan, some seasoning, then the pepper and tomato.  Once they cooked for a few minutes, I added the eggplant and continued to stir every few minutes (I kept it on medium to low heat).  Once the eggplant looked like it had softened and cooked through lightly, I poured in some Rao's Tomato and Basil sauce and just kept cooking the mixture til it had bubbled and cooked for about 10 minutes.  And voila! 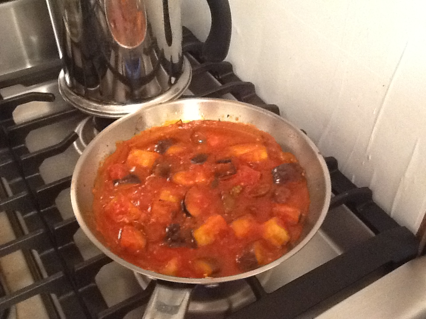 I prepared some Fucilli, added the sauce, and we had a pretty good meal!

Posted by Many Creative Gifts at 7:51 AM No comments:

I'm so excited to announce that my Beaded Crochet Owl Pin pattern is in Issue 43 of Inside Crochet magazine!  An editor sent me these great photos that really highlight the pins: 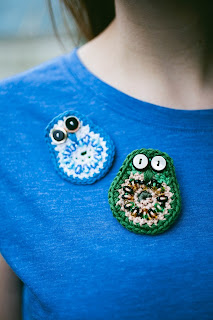 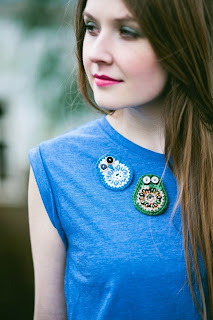 Issues of Inside Crochet magazine seem to now be available on iTunes and Pocketmag.  Issue 43 should be in stores in August here in the States.  I also will be allowed to post the pattern in my Ravelry store in about 6 months :-)


Posted by Many Creative Gifts at 1:41 PM No comments:

I have vowed this summer not to do any serious reading!  I am stocking up on fun, light reading that keeps my attention but that I can pick up and put down while at the pool.  Oh, and I decided to go with a crochet and knitting theme :-)

Well, so far, I've read two wonderful books that fit the bill.  The first, Hooked on Murder by Betty Hechtman, was an easy and enjoyable read.  I totally agree with Earlene Fowler's description on the jacket that it is "a gentle and charming novel... Its quirky and likable characters are appealing and real."  Crochet club member Molly Pink gets caught up in a murder mystery and does a little amateur sleuthing to try to solve the crime.  The book even includes the group's crochet pattern for a granny square and a recipe for pound cake!  I'm getting ready to read the next book in the series Dead Men Don't Crochet (admit it, pretty corny and clever titles!)

And, the second,  The Beach Street Knitting Society and Yarn Club by Gil McNeil, is a bit more thoughtful and serious with a British twist.  Jo Mackenzie finds herself widowed with two young boys, starting over in a small town as a yarn shop owner.  Despite a whole other set of quirky characters, the community embraces Jo, and she is headed towards a brighter future.  I think I'll probably pick up the next in this series of books as well.

Both books were relatively quick reads and entertaining, and both authors know their fiber arts!
Posted by Many Creative Gifts at 2:47 PM No comments:

For those of you who have been following my adopt-a-sheep adventures for a while know that my first sheep "Princess Maple Leaf" met an unfortunate end not to long ago (see post here for more details and our website page) and that Caroline Owens of the Owens Farm assigned a new sheep to me.  Coopworth # 217 is quite lovely, isn't she? 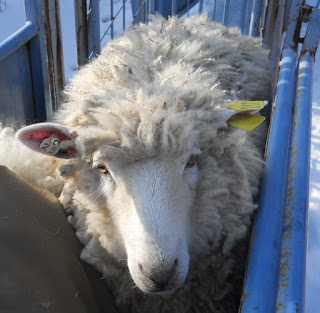 Thank you to those of you who all made fine name suggestions, but out on my balcony yesterday, it hit me -- Petunia!  I have some beautiful white petunias growing right now in planters, and they are doing well, even with the heat we've been having lately.  Even though the petunia is a delicate looking flower, it really is quite hardy, grows well, and withstands the elements like a trooper.  Hopefully Petunia will do the same!

Posted by Many Creative Gifts at 9:24 PM No comments:

I'm seeing more and more patterns that have schematics with crochet symbols in addition to the written instructions.  I really haven't worked with crochet symbols that much, but I can see how a stitch diagram could really help in making an intricate design.  So, look out for some posts in the future about crochet symbols, but in the mean time, check out my new tip on Lifetips with resources for crochet symbols.


Posted by Many Creative Gifts at 8:26 AM No comments: