Ah, I've been in project-completion mode!  Got the scarf done for the Special Olympics: 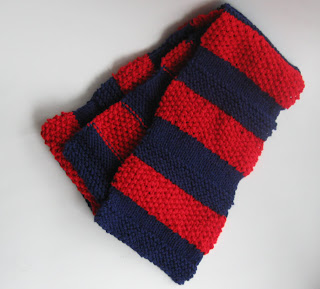 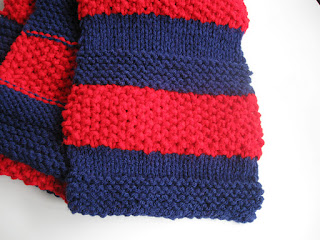 It was a fun project.  I just did some rows of the garter stitch, some rows of the purl stitch (both in blue), then a chunk in the seed stitch (in red).  Of course, while I'm piddling along on this one scarf, my mom did 4 scarves!  I'll be shipping them off this week to the Maryland chapter (couldn't find one here in the District).  There's still time, so please check out the Scarf Project site:  http://scarvesforspecialolympics.org/

Next, the Tiramisu baby hat!
Posted by Many Creative Gifts at 6:28 PM No comments:

Sorry about the sensationalist headline but Princess has been sheared! 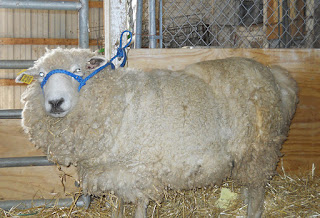 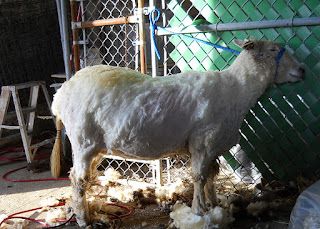 I should have about 7 pounds of fleece coming my way soon!  Mmmm, I'd better start looking for that yarn spinning class :-)
Posted by Many Creative Gifts at 9:35 PM 2 comments:

Yesterday sure had its ups and downs!  Caroline and I had decided on a name for Coopworth # 236 as a result of the Name That Sheep contest:  Princess Maple Leaf (most likely Princess for short).  And I was all excited to announce on Facebook yesterday morning and here as well, but when I went to the computer, this email pops up with an exclamation point marker on it.  Caroline sent me a message to tell me that Princess had almost been lost!

Sheep, especially pregnant ones, sometimes get "cast"--stuck upside down -- and it can kill them.

When Caroline went to check the sheep, it seemed that the flock was doing just fine, all upright and moving about.  But, as she was heading back to the barn through a woody section of the pasture, Hannah the Border Collie began bouncing around like she smelled sheep.  And, sure enough, there was Princess, upside down in a ditch, thoroughly stuck. They were able to get her back up, and, once she got the feeling back in her legs, she was able to move around, and she ate well. Close call! Caroline also pointed out that this is another good reason to put blankets on the sheep: her beautiful wool was protected from being ground into the mud.

Whew, it makes me realize how hard it really must be to tend animals and run a farm!  Thank goodness for Hannah.  I had visions in my head of those old Lassie TV shows, where Lassie goes running to the family, barks a few times, and they just immediately sense what she's trying to tell them.

Well, I hope my next update on Princess will be a much better one!!
Posted by Many Creative Gifts at 8:43 AM 2 comments:

Wishing everyone a Happy New Year!

I've gotten a fun start to the year so far, crochet-wise:

My friend Jean just got back from a trip to Austria and brought me back a beautiful crochet book in German.  It's by a French crocheter Cendrine Armani, and it's got the cutest crocheted animals ("les doudous" in French, which basically means a child's stuffed animal or security blanket) traveling on an adventure around the world together.  Now, I don't know a lick of German, but once you figure out the German abbreviations for single crochet, double crochet, etc. (and the book has plenty of pictures), then it's not so hard to figure out the pattern instructions (plus I can always ask Jean to translate for me :-)

And, last night, I was in Barnes & Noble looking for Inside Crochet magazine when I came across the premiere issue of Love of Crochet magazine, which has been launched by the Love of Knitting publishers.  I haven't really had a chance to go through it, but with a flip-through, there's a real variety of patterns in there, though I also felt that I had seen some of them before in other places.
Posted by Many Creative Gifts at 6:21 AM 2 comments: