Ah, the rippled pouch bag is done -- it's on display at Looped Yarn Works, and the pattern is available on Ravelry!  It was a fun project, and I enjoyed creating the photo tutorials and inserting them into the pattern for the BPdc (back post double crochet) and the ldc (looped double crochet). 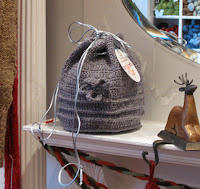 The mittens are next!
Posted by Many Creative Gifts at 10:56 PM No comments:

So the turkey is cooked, the sweet potatoes have been baked and marshmellowed, and the veggies are steaming!  This year, we decided to make all the fixings ourselves (with lots of help from Whole Foods), and it's been a good day so far --  cooking, laundry (hey, had to squeeze that in somewhere), and football right after the Macy's Thanksgiving Day parade (which balloon character is your favorite?!  I love the Smurfs :-)

Ah, and how to face Black Friday?!  By going to work and trying to avoid all the craziness.  I do need a new lamp for the living room though, so I might just let my fingers do the shopping this year (free shipping and delivery seem to be the draw this year).

The pouch bag that I've crocheted as a sample of the Cascade Portland Tweed yarn is done and just needs some finishing touches.  I found some silvery grommets (eyelets) to give it a hopefully professional finish.  I'll post pictures soon.  Now, back to the mittens...
Posted by Many Creative Gifts at 3:00 PM No comments:

So, I promised FaveCrafts that I would come up with a crocheted ornament for Christmas, and I'm finally sitting down to craft something special for the holidays.  I got to thinking about how 1) I'd like to make something that everyone can make for any holiday they are celebrating, and 2) I'd like to make something that can still be used to decorate a tree.  So, I came up with a crocheted bow! 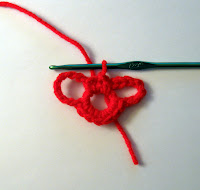 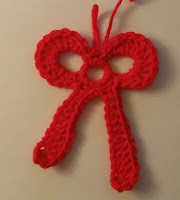 I hope you will experiment with this pattern and come up with your own modifications (maybe another sc row around in another color?  maybe the first round in a different color than the second round?) and tell me about it!  Happy Holidays :-)
Posted by Many Creative Gifts at 7:40 PM No comments:

I got to go to the New Zealand embassy last night!  Mmmmm, they had lamb chops, skewered beef, and beet root mousse canapes, it was just so tasty.  It's a really beautiful building near to the Vice President's residence up Massachusetts Avenue on Observatory Circle.  Thank goodness the rain had let up and the temperature was mild because we ended up doing a lot of walking to get there and get home.

I met a gentleman from the Lamb and Beef Board, and, of course, I had to ask him about what happens to the wool of the lambs before they become dinner!  (You know, I have to say at this point that I try hard to eat as little meat as possible, I really don't like thinking about how an animal had to die to feed me, but suffice to say, no one was thinking about that last night!).  Turns out such lamb have courser wool, so it tends to go into carpet manufacturing.  In fact, the new rug in the Oval Office that was made in Michigan with a special design has a lot of New Zealand wool in it!

Ok, speaking of course wool, I'm running into a problem with one of the yarns that I am making a sample with.  I decided to make the rippled beret with Classic Elite Portland Tweed because it's the right yarn weight, and I thought that the tweeding would look good with the ripple technique, and it does look good (it's a great yarn to work with), but it's stiff!  Now, I'm debating whether to just unravel the whole thing and come up with a new project for that yarn (maybe a purse?) or wash it and see what happens (will it soften?) -- anybody got any suggestions for me?!
Posted by Many Creative Gifts at 8:37 AM 1 comment:

and how to lose it very quickly!  "Trust" is the latest buzz word being touted in business literature.  I've recently experienced loss of it as a consumer, so it got me thinking about it as a small business owner.  As consumers, we expect businesses to meet our needs without much effort on our parts.  We place an order, and we expect to receive it as described seamlessly. These days, with all the social media and emphasis on making personal connections, even with businesses, we're expecting even more from business owners and feeling downright hurt if our expectations aren't met.  That's even more pressure on the business owner than before!

For example, I had signed up for an online course, which had as part of the package a free one-month trial of an additional service.  The offer was that, after the free trial, my account then would be charged an additional fee each month.  I tried to access the site on which the additional service was being offered, but something technologically wasn't working.  After reporting the problem, I received a personal email from the owner explaining the inaccessibility problem and the solution that would be implemented in the future, and assuring me that my automatic account charge had been cancelled.  I had known exactly the date by which I would need to cancel in order to avoid the charge, but I trusted that the matter had been addressed.  As I'm sure you've figured out by now, I was charged.

Of course, I shot off an email expressing my frustration because I was mad at the owner and myself for not going to the site and ensuring that the account really was cancelled.  But, then, I tried to think through my personal reactions as a consumer and how that might affect how a small business owner should react in such a situation.  The response I received was an example of what I think the current business rhetoric is -- give a detailed explanation of what went wrong.  Yeah, that's great, but frankly as a consumer, I'm not sure I really care what went wrong -- I want to know what you, Ms. Business Owner, are going to do to make things right.  Now, in this particular case, such information was included in the response, but it came later in the email.  I think that information needs to be the first thing that you need to convey to your unhappy customer.

Also, don't read too much into what the consumer is telling you and give answers not warranted or required -- in the response, the owner said "I assure you there was nothing sneaky going on here."  Nowhere in my message did I suggest that I thought that anything had been done deliberately or with malicious intent.  In fact, I had clearly stated that I thought the mistake that the owner (and I) had made was to rely on the automated service of a third party vendor.  Mmmm, why are you (business owner) bringing this up and planting it in my head?!

So, the takeaway lesson here? -- 1) immediately address the steps you have taken or are going to take to ensure a solution to the customer's complaint, 2) if necessary, give some explanation of what went wrong, but don't go on so much that it starts sounding like an excuse, and 3) throw in an attractive treat that will encourage the customer to shake off this bad episode and give you a chance again in the future (pay attention, sometimes the customer will indicate what will make him or her happy and keep them coming back).
Posted by Many Creative Gifts at 12:11 PM No comments:

I promise I will explain in the next paragraph what this has to do with either crochet or marketing!  But, in the mean time, if you are looking for a tasty and different breakfast bread, then try this fabulous recipe on the Whole Foods website for coconut bread rolls:  http://www.wholefoodsmarket.com/recipes/2253  I was able to find only sweetened shredded coconut in the grocery store (didn't actually make it to a Whole Foods), so I used that and didn't add any sugar (just a little drizzle of agave syrup).  The rolls really came out great, I'm looking forward to making them again, but it is about a 3 hour process from start to finish.

And, there's where the crochet comes in :-)  I was able to get the top half of my Rippled Beret done (I'm making a sample version to display at Looped Yarn Works!) during the waiting times in between the different steps for the bread (first, you let the yeast mixture sit for 15 minutes, then the bread dough sits for 1 1/2 hour, then you make the rolls and let them sit for another 45 minutes, then bake for 20 to 25 minutes).  I love how I was able to multitask and have such a delicious (and still relatively healthy) breakfast after my hard work! 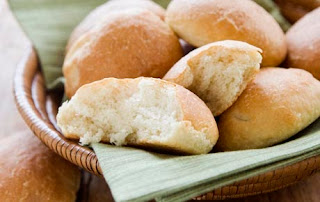 Posted by Many Creative Gifts at 8:16 PM No comments:

Shauna Richardson has been featured on a number of crochet sites and blogs in the last year or two, but I thought this link offered the best pictures and up-to-date information about her work.  http://www.mymodernmet.com/profiles/blogs/crochet-animal-sculptures-7  Her sculptures really are amazing -- I can't imagine having that much artistic talent and patience to create such huge and lifelike crocheted animals!

PS  I'd recommend that dog lovers also click on "The Fine Art of Dogs" link at the bottom of the crochet post :-)
Posted by Many Creative Gifts at 5:49 PM No comments: